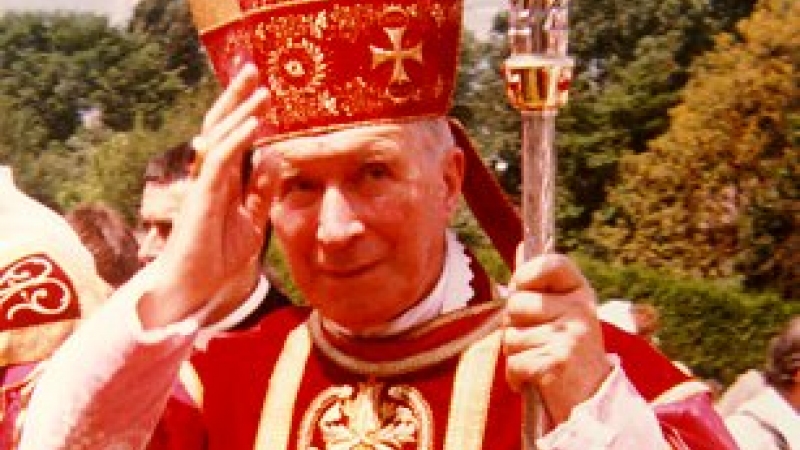 For once, Bishop Williamson in his Kyrie Eleison raises the right question, but starting from false principles he reaches a false conclusion.

The right question is truly whether the Society of St Pius X should be discussing with the Roman authorities to obtain a rectification of its canonical situation.

This situation is abnormal, but without fault on the part of the Society of St Pius X, since, due to his fidelity to the traditional faith and liturgy, Archbishop Lefebvre was pushed into an irregular situation, “marginalised” and even unjustly accused of schism. In 1975, he was given the choice either to withdraw from the fight, to close his seminary and to renounce to perform any ordination, thus not to transmit that which he had received, or to incur the modernist wrath and sanctions; these sanctions were opposed to canon law, because their principle was the suppression of the SSPX by Mgr Mamie, and this one was evidently contrary to the canon law. Archbishop Lefebvre’s two appeals were buried without response; now since these appeals were suspensive, the SSPX continued legitimately in reality though in an appearance of illegality. In 1988 it was the same dilemma: either to stop transmitting that which he had received, or to follow the example of the Good Samaritan who, in spite of his condition of foreigner without any local authority, took care of the souls in necessity. It is this appearance of illegality that needs one day to be corrected, nay that it is good to correct since order in the Church is a great good and disorder – even if one is not responsible for it – remains in itself an evil that must be corrected.

This question is at the very heart of Bishop Williamson’s rebellion: indeed he would never have made so many false accusations[1] against Bishop Fellay if this disagreement was not behind them (see my open response to his open letter to the SSPX priests in 2013).

The first principle neglected by Bishop Williamson is given by St Augustin: “the wicked in the Church – either unknown or tolerated by the good for the sake of the unity of peace – cannot harm the goods who do not consent to them unto evil.” [2] More than two years ago I already pointed out to this principle of St Augustine, and explained: “To understand the principle of St Augustine, one must remember the great truth which Father Calmel often recalled: the head of the Church is Christ; the Pope is only his vicar. It is because the communion with the members of the Church is first of all communion with Christ that it does not harm the goods, so long as they do not consent to the evil. And it is because they forget Christ at the head of the Church that certain persons are so afraid of this communion, paying attention only to the human side of the Church and forgetting the Sacred Heart who is in control of everything in His Church. Their zeal so bitter – so opposed to the spirit of Archbishop Lefebvre – manifests this neglect of the Sacred Heart. Let us pray for them.”[3]

Bishop Williamson pretends to “refute” this by writing: “it is never from the corruption of the corrupt Church officials that they will be able to draw their spiritual life.” Who does not see the flaw of such refutation: nobody ever pretended that it is the corruption of the officials that can provide spiritual life, and nobody ever wanted to follow them in their corruption. St Augustine on contrary insists on the necessity not to consent to their corruption! But on the contrary it is as successors of the apostles – and not in as much as they are corrupted – that it is necessary to be in communion with them. But nowhere does Bishop Williamson mention them as successors of the apostles; it is not surprising then that his conclusion is false. It is evidently with the officials of the Catholic Church as successor of the apostles and not as corrupted, that Bishop Fellay and the whole SSPX wants to be in a proper relation and canonical situation, with no compromise in doctrine. And since ecclesiastical communion, unity with the Church, is not a secondary and optional good, but rather a good necessary for salvation, since outside of the Church there is no salvation, then – even though we are not guilty of the abnormality of our situation – it is good, it is necessary to work for its correction, for the good of the Church.

And the principle of St Augustine is there to guarantee that in the Catholic Church communion with these corrupted officials will not harm the good who do not consent to their corruption.

Evidently, what St Augustine taught, Bishop Williamson does not believe. He writes indeed: “Catholics must positively avoid such officials” in an absolute manner. It is truly an attitude practically sedevancantist. Indeed how to be practically in communion when one practically avoids all contact? Of course, simple faithful should be protected by their priests from immediate contact, and also simple priests should be protected by their superiors, but if there are no contact at any level, how could that be a true communion? Bishop Williamson recognises the Pope in theory, but in practice he wants no contact at all with him: one recognises here the methods of liberals, who recognise the Catholic thesis but in practice follow the contrary hypothesis. Similarly he recognises in theory the good of authority but in practice he rejects all authority, and above him and below him! Since the rejection of authority is the hallmark of the liberal, before criticising Bishop Fellay Bishop Williamson should rather make a good examination of conscience and correct his own self. We pray for this.

What Archbishop Lefebvre has done, Bishop Williamson does not want Bishop Fellay to do. Indeed Archbishop Lefebvre has never refused to meet Roman authorities; each time they asked, he went to Rome to promote the cause of Tradition – including to work towards a canonical situation of the SSPX. If he said that he “went too far” in the acceptation of the protocol of 5th May 1988, he never said that it was not good to try, to discuss to obtain an approval, on the contrary! He even expected that contracts should start again within three years. They started twelve years later, and the least one can say is that Bishop Fellay has not been too fast, that he took plenty of time.

Bishop Williamson reproaches “Rome’s granting of bishops to visit the Society’s seminaries”, making no distinction between bishop and bishop, as if they were all as modernist as Cardinal Kasper. This is indeed a great lack of Thomist realism! But there is beneath this a principle that is fundamentally false, which he had already exposed in December 2012 in his KE 281 entitled Various “churches”:

“That part alone of the visible Church is Catholic which is one, holy, universal and apostolic. The rest is various sorts of rot.”

In other terms, the Catholic Church is the (small) sound part of the rotten apple; these bishops sent by Rome belong to the rot, they are not Catholic.

There is here a principle fundamentally false, deeply erroneous, which undermines the whole theology and practice of Bishop Williamson and of the so-called resistance, the principle of a “Catholic church being the sound part of the visible Church”; this is a principle which I would call neo-Cathar, reducing the Catholic Church to a part of the visible church, the part of the clean at least in their faith (indeed they do not claim this in their morals). That renders practically the Catholic Church invisible, since the limit between the sound and rotten parts is impossible to determine: it denies therefore the visibility of the Church. He practically refuses communion with the rest, with what he calls the rot, and justifies himself by thinking that this rest is not the Catholic Church. But can he not see that in the present situation he reaches a “little church – Petite Eglise”, which he pretends to be Catholic, but which does not have any pope, since the present Pope would be according to him in the rest, in the rot and not in the sound part? Thus he truly falls – in spite of his multiple claims to the contrary – into sedevacantism, at least in practice. Through the bitter fruits of this so-called resistance, one can see the evil of such false principle; an episcopal consecration based upon such false principles cannot be legitimate.

May the blessed Virgin Mary, in this feast of her Visitation, deign to help us to remain faithful, she who is the Virgin most Faithful!

[1] E.g. “the Society’s leadership seems to have lost its grip on the primacy of truth, especially Catholic Truth.” RNW in his 2013 open letter to SSPX priests.